Noida: known film and TV artist Amita Nangia conducted an interesting film workshop with the students of Acting and Presentation at Asian Academy of Film And Television

Answering to the questions of students of acting, Amita Nangia expressed that nothing is impossible in this World, it may be difficult to achieve the success. She narrated her experiences in film and television production at length.

Amita Nangia’s initial popularity was from her role as Sheena in TV serial Tara, broadcast on Zee TV in 1993. She played roles in many Bollywood movies, and was among the five girls of popular TV serial Hum Paanch sitcom,also on Zee TV. She has also acted in Bollywood movies like Purani Haveli and College Girl. She was last seen playing the role of an sorcerer in the Indian’s mystery and thriller show, Kaal Bhairav Rahasya.

“We are thankful to Amita for being with us and sharing her experience,” said Sandeep Marwah President Marwah Studios. Marwah also presented Life Membership of International Film And Television Club of AAFT to Amita Nangia.

Fri Jun 1 , 2018
At Eleven Madison Park—ranked No 1 on the world’s 50 best restaurants list in 2017—simplicity and minimalism are driving a culinary revolution. Bringing to India a taste of his New York based restaurant, co-owner and chef Daniel Humm was in India recently who was invited by Sandeep Marwah to Asian […] 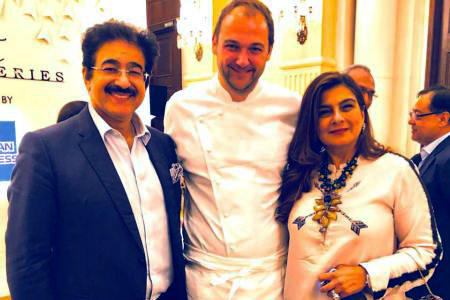