New Delhi: “It is a wonderful opportunity for me to meet some of the most important people from Uzbekistan who matters when it comes to film business. Festivals are the best way to project your culture, I have always believed that Films are the best ambassador of culture,” said Sandeep Marwah President of Marwah Studios at the opening function of festival of films from Uzbekistan at Islamic Culture Centre.

“The visit of delegation has motivated us to visit Uzbekistan as early as possible. Very soon we will able to convert dreams into reality,” added Marwah thanking for the invitation received from Government.

India and Uzbekistan can develop and promote their relations through art and culture, Indo Uzbekistan Film And Cultural Forum will sure add value to the whole show. I invite Marwah to visit Tashkent and Plan Uzbekistan as film destination,” said H.E. Farhad Arzeiv Ambassador of Uzbekistan to India while inaugurating the festival.

Delegation From Uzbekistan to Marwah Studios

Wed May 30 , 2018
Noida: A high powered delegation from Uzbekistan visited Marwah Studios at Noida Film City to join hands for films and media business with India. “The Embassy of Uzbekistan has referred the most popular film, television and media unit and founders of Noida Film City to the visiting Government officials from […] 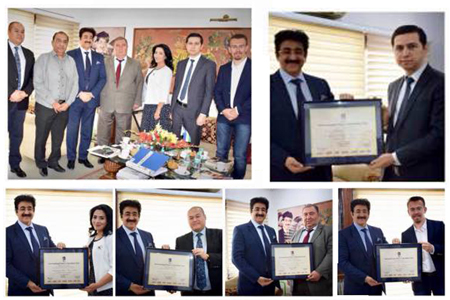