“The Embassy of Uzbekistan has referred the most popular film, television and media unit and founders of Noida Film City to the visiting Government officials from Tashkent along with film makers as we are sure we will reach to some better conclusion, ”said Muzaffar B Kamilov Second Secretary- Information And Culture Embassy of Uzbekistan in New Delhi, India.

We are keen and ready to visit Ubzekistan as film shooting and film production is our most important agenda. We have formed Indo Uzbekistan Film And Cultural Forum and your presence has added a lot to it,” said Sandeep Marwah President of Marwah Studios.

“I had the pleasure to shoot two of music video from India in Uzbekistan. We are now well equipped to shoot any feature film in our country,” said Sukhrat Viayumov Producer in Koyumov Film Studios.

“We invite you to visit Tashkent and plan a film in Uzbekistan. We are open to many negotiations. Your visit will enhance the film collaboration between two countries,” said Rizayev Shuxrat Deputy General Director.

Golib Nematov Head of Department and Mrs Lola Eltaeva renowned actress were also part of the delegation. Later Sandeep Marwah Honored all the members of the delegation with life membership of International Film And Television Club of AAFT.

Thu May 31 , 2018
New Delhi: More than 200 Africans representing Nigeria, Ethiopia, Uganda, Rwanda, Ghana and other nations gathered at Indo Nigerian Summit at Marwah Studios to celebrate cultural ties with India, a summit organized by International Chamber of Media And Entertainment Industry. “Out of 55 countries of Africa Sandeep Marwah is already […] 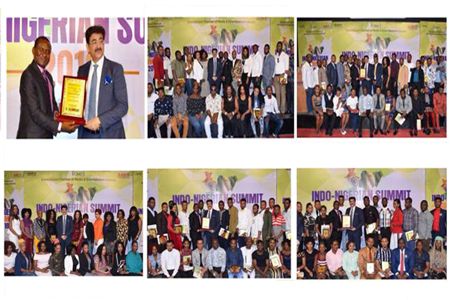