New Delhi: Mr. Farhod Arziev His Excellency, The Ambassador Extraordinary & Plenipotentiary of the Republic of Uzbekistan to India presented with the Patron ship of Indo Uzbekistan Film And Cultural Forum by Sandeep Marwah President of International Chamber of Media And Entertainment Industry.

“Indo Uzbekistan Film And Cultural Forum will grow fast & better under the directions of H.E. Farhod Arziev Ambassador of Uzbekistan to India. His expertize in international relations will give this organization correct advices and guidelines,” said Sandeep Marwah President of ICMEI and AAFT.

The members of the organization presented a memento to His Excellency in the Embassy as a mark of love and respect. “ I am pleased to be associated with IUFCF and we must design all our future plans of this Union of two countries India and Uzbekistan,” said Farhod Arziev while accepting the Patron Ship.

The organization will formally be inaugurated in the next month after the visit of the Indian delegation of 18 people to Uzbekistan under the leadership of Sandeep Marwah.

Fri May 25 , 2018
New Delhi: A new committee under the name and banner of Indo Uzbekistan Film And Cultural Forum is formed to develop and promote relation between two countries. The Ambassador of Uzbekistan to India H.E. Farhod Arzieve will formally inaugurate this association in the month of June, 2018 as suggested by […] 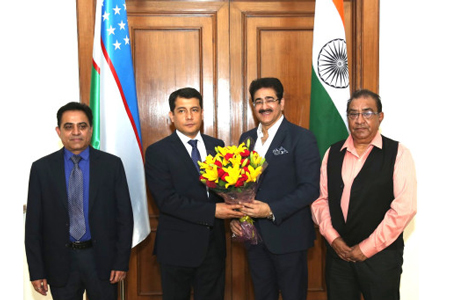