New Delhi: The President of International Chamber of Media And Entertainment Industry Sandeep Marwah met H.E. Saud bin Mohammed Al-Saty Ambassador of Saudi Arabia to India to request him to inaugurate the committee on Saudi Arabia at ICMEI.

Sandeep Marwah briefed Ambassador with the activities of the Chamber and proposed an AAFT scholarship to the deserving student from Saudi Arabia.

Saudi Arabia is a desert country encompassing most of the Arabian Peninsula, with Red Sea and Persian (Arabian) Gulf coastlines. Known as the birthplace of Islam, it’s home to the religion’s 2 most sacred mosques: Masjid al-Haram, in Mecca, destination of the annual Hajj pilgrimage, and Medina’s Masjid an-Nabawi, burial site of the prophet Muhammad. Riyadh, the capital, is a skyscraper-filled metropolis.

Mon May 21 , 2018
New Delhi: An exhibition of Paintings from Peru along with Peru traditional dresses, art works and Peruvian cuisine was recently inaugurated by H.E. Jorge Castañeda Ambassador of Peru to India at Art Gallery of Embassy. During event Ambassador also unveiled four new Peruvian cookbooks, which include some of its emblematic […] 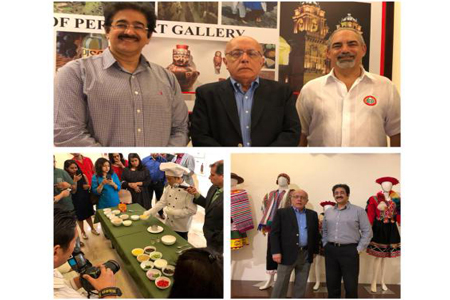