Nicaragua: AAFT Alumna Srishti Kaur from India was crowned Miss Teen Universe 2017 at the sixth edition of the pageant held in the Ruben Dario National Theatre in Managua, the capital city of Nicaragua.

Srishti Kaur beat 25 contestants from across the world to win the pageant. A student of AAFT, Srishti is currently pursuing her studies at the London School of Fashion.

Samantha Pierre from Canada was crowned the first runner up and and Ary Trava from Mexico was the second runner up. Srishti also went ahead to win the Best National Costume Award.

“ I belong to the unification of diversity, India. I have got India’s youth award and international women film forum award. I want to launch my own brand and promote Make In India Campaign. I also want to work for my society and for that I have become the brand ambassador of Indian Cancer Society,” said Srishti Kaur influenced by the President of AAFT Sandeep Marwah.

“I also run a school for the underprivileged children by the name of Apna School and works for the blind school. I also run an online retail chain store in India by the name of Crystal Sourcing. After finishing my course from AAFT now I am working to get into films because I now aim to foray into the world of silver screen.

“We at Asian Academy of Film And Television are more than excited for the laurels Srishti has brought to the Asian Education Group. She deserves all the honor and respect from the institution,” said Sandeep Marwah President of AEG.

Mon May 21 , 2018
Noida: The three day Global Fashion And Design Week 2018 announced some prominent awards for the officers of the central office of Marwah Studios and Asian Education Group. The first award went to Haripriya Thakur who has also completed her 8 years in the organization and has risen now to […] 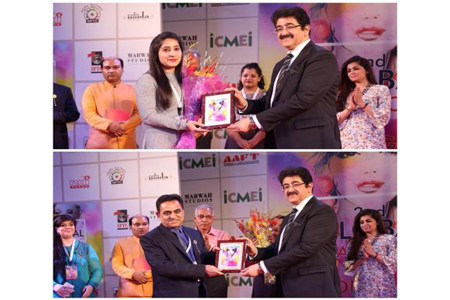