New Delhi: A Ghazal evening to promote authoritative lyrics was recently organized by organization under the leader ship of Dr, Mridula Satish Tandon at Islamic Cultural Centre for Arts at New Delhi.

A book, comprising of lyrics by ten different writers, was also released in the august presence of all the writers by Sandeep Marwah President Marwah Studios and other dignities followed by release of Ghazal Album ‘Soch Ke Moti’ sung by Shakeel Ahmed who later took over the show from the rest of the people reciting poetry.

“Writing, music and other creative arts can get you success and name if you are in love with your creative profession. The passion is the key word for artists and it must drive you also to work hard. A lot of persuasion is needed to come forward and be in the first lists of successful artists,” said Sandeep Marwah expressing in poetry liked by the music lovers in the hall. “Powerful lyrics makes the music last for ever,” added Marwah.

Thu May 17 , 2018
Mount Abu: A grand cultural event to promote love and peace was inaugurated by Sandeep Marwah Global Cultural Minister at the international head quarters of Brahma Kumari at Mount Abu. Large number of participants from all over India and abroad reached there for a residential program. The permanent members of […] 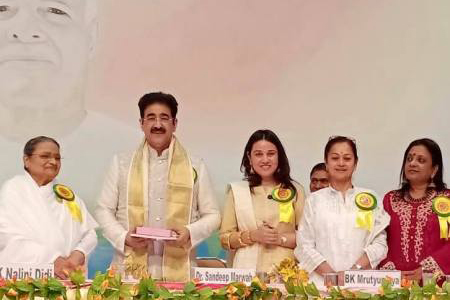