Noida: The most popular film and Television training centre of the country of India – Asian Academy of Film And Television inaugurated its 99thBatch at Marwah Studios, Film City Noida.

“We are one batch away from the Century, the excitement level has gone much higher. Many new ideas are prevailing in mind and heart. We have proved to the World that we are the best. Running 99 batches have given us a research content for 99 times. We have learned what is good what is not required. The success of our students is the clear proof,” said Sandeep Marwah President of AAFT as a opening statement of inaugural program.

“AAFT has brought the name of India to the highest level in film and television training. We are proud of Sandeep Marwah. Dadasaheb Phalke Film Foundation Award to Sandeep Marwah is the indication of quality in education,” said Dr. Yogendra Narain former Secretary Rajya Sabha, Government of India while lighting the ceremonial lamp.

“The growth of AAFT from single college to University is the measurement stick for the opinion makers to assess the quantity and quality of the success,” added Syed Shahid Mehdi the former Vice President of ICCR, Ministry of External Affairs, Government of India.

More than 500 awards, chairing 100 organizations, 33 years in media, 25 years in training, It is hard to get a mentor like Marwah in film and television training. Students cannot imagine how expensive education is being delivered at no price. Indeed AAFT is the best and number one film school in the World,” said J.P. Singh Director India Skills Development Council.

Mon May 14 , 2018
Mumbai: “I am thankful to each and every one who has contributed to the growth of Asian Academy of Film And Television in these last twenty five years of its existence,” said Sandeep Marwah founder, Promoter and President of AAFT during his trip to Mumbai. “1993 We shot Bandit Queen […] 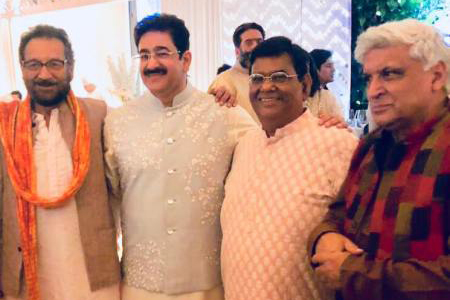