New Delhi: The Ambassador of Slovakia H.E. Zigmund Bertok today honored and nominated Sandeep Marwah as the Chair of newly constituted association under the name and banner of Indo Slovakia Film And Cultural Forum at the Embassy of Slovakia.

“The association is formed to develop and promote relation between two countries India and Slovakia through arts and culture. International Chamber of Media And Entertainment Industry is the right platform to have an association like this. Sandeep Marwah will fill in the enthusiasm to the show,” said H.E. Zigmund Bertok while handing over the certificate of appointment to Sandeep Marwah.

“What a pleasure, what a honor to be part of such a beautiful country and lovable people. I am delighted with the honor and it has added more responsibility on my shoulders. Soon we will start our programs,” said Sandeep Marwah President Marwah Studios and ICMEI.

Sandeep Marwah is the founder of Noida Film City. He is also the founder of Marwah Studios and Asian Academy of Film And Television. There are many film, television and media records to his credit. He has been a case study in more than 27 countries of the World. Marwah has been titled as Global Cultural Minister.

Mon May 7 , 2018
New Delhi: Recently the Embassy of Slovakia at New Delhi and International Chamber of Media And Entertainment Industry formed an association under the name and banner of Indo Slovakia Film And Cultural Forum. The organization was launched at the Embassy premises. This is first of its kind where film, television, […] 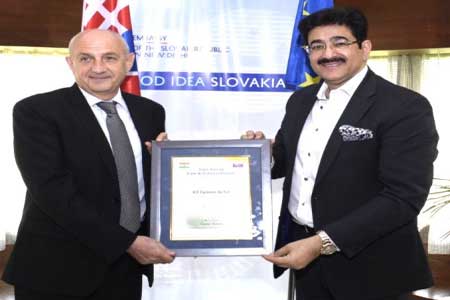