Mumbai: Renowned film and television personality Sandeep Marwah with five world records to his credit, honored with the most prestigious Dadasaheb Phalke Film Foundation Award for his untiring contribution to Cinema today at Chitrakoot Grounds in Mumbai.

Sandeep Marwah has been the founder of Noida Film City, the fastest growing film city in the World. It is a 100 acres complex with 75 acres outdoor 25 acres indoor, 16 studios, 350 Channels are being broadcast to 162 countries 24×7, 17000 media professionals are working in film city and cascading effect is that 150,000 people are earning their bread because of film city.

Sandeep Marwah is the founder of first professional film studios of North India-Marwah Studios and has churned out more than 4500 television program for more than 50 channels, 150 feature films, 5000 training films and also a birth place for most of channels in India from 1991.

Sandeep Marwah is the founder director of Asian Academy of Film And Television the first private film school of this country and has trained 12000 media professionals hailing from 120 countries since 1993. Now AAFT ranks as the first ten best film schools of the World.

Sandeep Marwah is the producer of largest number of short films in the World. He has provided a wonderful opportunity to more than 10,000 film aspirants hailing from more than 100 countries to shoot 2300 short films. Most of the films are based on social issues, documentaries and theme-based fictions.

Sandeep Marwah has designed and given 10 best festivals to the entertainment industry including Global Film Festival, Global Festival of Journalism, Global Literary Festival, Global Fashion Week, AAFT Festival of Short Digital Films etc. He has given the term Film Tourism to the dictionary and attracted 2 Million people to Noida Film City so far.

“I am feeling elevated and charged with new energy after this prestigious award. An award after the name of father of Cinema in India means a lot to me,” said Sandeep Marwah President of Marwah Studios while receiving the award in a grand function.

Large number of filmmakers, television personalities and people from media and other strata of life congratulated Sandeep Marwah who is also President of International Chamber of Media And Entertainment Industry.

Dadasaheb Phalke Film Foundation Award is 16 years old setup and the organization has been honoring people from Media and Entertainment Industry every year.

Sandeep Marwah Honored by Ministry of Textile at Varanasi

Mon May 7 , 2018
Varanasi: Legendary educationist and founder of Noida film city Sandeep Marwah was honored with Confluence –Aavaran Award by the Ministry of Textiles, Government of India at a grand function at Deen Dayal Hastkala Sankul at Badalpur Lamhi, Varanasi for promoting different kinds of art and culture of India. “It all […] 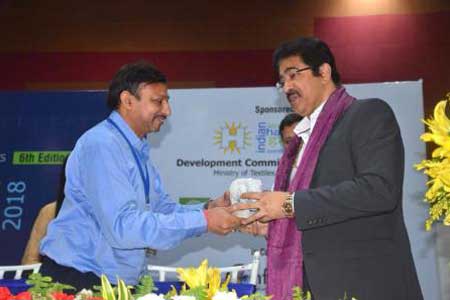