Organized in partnership with the High Commission of Canada in India, the spotlight for NCFD 2018 is on Canadian Indigenous cinema and women filmmakers. This theme is a reflection of the Government of Canada’s focus on promoting women’s rights and diversity and inclusion.

Speaking on the occasion, Ms. Soyoung Park, the Deputy High Commissioner for Canada to India said, “I am very happy to be here today as we celebrate National Canadian Film Day. We are pleased to hold this special screening at AAFT. It is a great opportunity to promote Canadian cinema and Canadian values around gender equality and inclusion.”

The Sun at Midnight, directed by a brilliant woman director, Kirsten Carthew, is set in the Canadian Arctic. The film tells the story of an unexpected friendship between a First Nations hunter and a teenage rebel.

AAFT Will Promote Art Hand in Hand With Brahma Kumaris

Thu Apr 26 , 2018
Noida: A team of representatives of one of the most popular spiritual organization Brahma Kumaris based in Mount Abu decided to join hands with AAFT- Asian Academy of Film And Television to promote art and Culture of India. “We are out and out busy in promoting our Indian art and […] 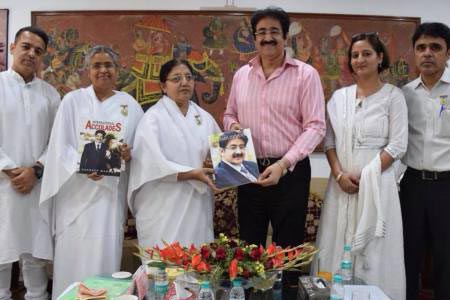