Noida: The High Commission of Malaysia to India and International Chamber of Media And Entertainment Industry, to promote relations through art and culture, jointly launched an organization under the name and banner of IMFCF- Indo Malaysian Film And Cultural Forum on the first day of 2nd Global Fashion And Design Week Noida 2018 at Noida Film City.

Sandeep Marwah presented the first Patronship of the association to H.E. Dato’ Hidayat Abdul Hamid High Commissioner of Malaysia to India in a grand function at Marwah Studios in the presence of professionals from the films, television, media and fashion fraternity.

Dato’ Hidayat Abdul Hamid joined the Malaysian Public Service in 1992. He was the Ambassador of Malaysia to Kazakhstan since 2014 prior to his appointment as High Commissioner of Malaysia to India.

He was previously the Deputy Director at the South East Asia Regional Centre for Counter-Terrorism (SEARCCT) from 2011 to 2014, Consul General of Malaysia in Jeddah, Saudi Arabia from 2007 to 2011 and Counsellor at the High Commission of Malaysia in Bandar Seri Begawan, Brunei from 2005 to 2007. 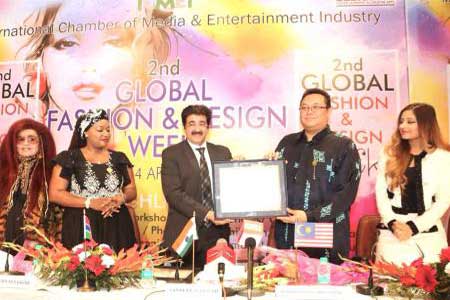