The report was prepared by the Asia Post agency under the leadership of Rajiv Mishra keeping in mind twenty top points of research. On the basis of final results delivered by the agency, awards were presented in a grand function at India’s most prestigious auditorium of Vigyan Bhawan.

In continuation to above M.P. N.K. Premchand – a revolutionary Socialist from Kerala; M.P. Om Birla from Rajasthan – very popular for his efforts to improve the education system; M.P. Chand Prakash Joshi from Rajasthan has supported sports; M.P. Pushpender Singh Chandel from UP is trying to bring about awareness among people; M.P. Arvind Savant – a passionate person for the development of his area South Mumbai; M.P. Ravindra Kumar Jaina – a progressive person from a backward area Balasore in Andhra Pradesh; M.P. Poonam Mahajan – the face of Youth from Maharashtra; M.P. Virendra Singh Mast – a serious personality liked by the people from UP; M.P. Gaurav Gogai – Trying his best for the development of North East; M.P. Sharad Tripathi – the Hope of the people from his Constituency Santkabirnagar; M.P. Nishkant Dubey – the management guru from Jharkhand; Kalikesh Singhdev – smart and dynamic MP from Orissa; M.P. Saugat Rai – man of masses from West Bengal; M.P. Prem Singh Chandumajra – working for the people since student life from Punjab and Ramesh Chand Kaushik – hard-working MP from Haryana were presented with prestigious Fame India Award.

“This is for the first time that someone has taken initiative to honor members of the Parliament. Most of the time, they have been always bone of contention. I appreciate that media has thought of such events,” said Dr. Harshvardhan.

“The Chamber understands the difficulties and challenges what a MP goes through during his tenure. He spends his whole life in satisfying and filling the requirements of the citizens of his constituency. MPs need to be appreciated for their sincere contribution in nation building,” said Sandeep Marwah President, ICMEI.

“We shall be coming back to Vigyan Bhawan very soon with another National level Award”, said Umashankar Sonthalia thanking everyone present at the award ceremony.

Sandeep Marwah Honored On The National Day of Ghana

Wed Apr 11 , 2018
New Delhi: The first ever Indo Ghana Film And Cultural Forum has been launched recently by the renowned media personality Sandeep Marwah in association with High Commission of Ghana in India. The Forum has already started the promotion of Republic of Ghana, its ideology, people to people contact, promotion of […] 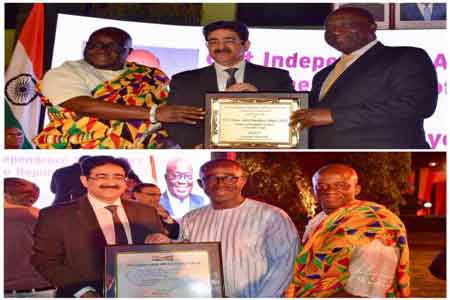