Noida: The founder of Noida Film City and President of Marwah Studios Sandeep Marwah was honored by PNI Achiever’s Award for bringing International fame to Noida.

“We all have some or other qualities, we can assemble our energy and lets start working for the nation, for the people of this country. Country needs people like you,” said Sandeep Marwah in a grand function to celebrate the annual award function by PNI News at Noida.

Sandeep Marwah has brought two million people from 145 countries of the World to Noida Film City through his efforts and film tourism a word given by him to the dictionary of Tourism. He has trained more than 12000 media professionals hailing from 29 States, 7 Union Territories and 120 countries of the World.

“Six World Records to his credit and brought 100 international awards to India. He is the only Indian who has been decorated with highest number of designations from the largest number of Governments of the World. The City of Noida is proud of Sandeep Marwah,” said Pankaj Raj Singh Editor in Chief of PNI News Agency.

Later Marwah presented Achievers Award to Some of the most prominent people of Noida who all have contributed to the promotion of art, culture, social upliftment, literature, sports, media and other disciplines.

Tue Apr 10 , 2018
New Delhi: On 8th April, the International Day of Roma Sandeep Marwah was honored for his contribution to the Roma studies in a grand function at   International Research Centre at Rohni. The Centre of Roma Studies organized a colorful event where Sandeep Marwah the President of Marwah Studios and Asian Education […] 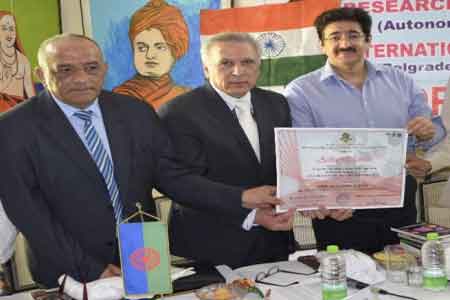