Noida: On 9th March, a prayer ceremony was held at Marwah Studios, Film City, Noida, in remembrance of the legendary actress Sridevi. She has served as the Board of Directors of Marwah Studio  and was a kin to Marwah family as well.

Sadly, on 24th Feb. 2018, due to accidental drowning in the bath tub after loosing her consciousness at a hotel in Dubai, she left us towards her heavenly abode. All the members of the Marwah Studio including the Faculty, Staff and the Students gathered to pay homage to the departed soul. A two minute silence was observed followed by a short video showcasing some clips of Sridevi’s terrific performances and views for her given by her co-stars like Anil Kapoor, Jitender and Rishi Kapoor.

“Sridevi was an outstanding actress who has made a terrific mark in the history by serving the film industry for  50 long years. Not only I have lost a family member, but film industry has lost one of it’s most beautiful and talented gem, I pray that all good things that were in her mind, get accomplished and may the paragonic beauty rest in peace.”, said Sandeep Marwah President of Asian Education Group.

He also announced a scholarship by Sridevi’s name to be launched and a retrospective of her movies at Marwah Studio in the coming days as a gesture of respect towards her. The lady superstar, the very versatile and talented actress, Padmashree Awardee, who entertained the entire globe for 50 long years, will always be alive in our hearts. Her work has made her eternal. 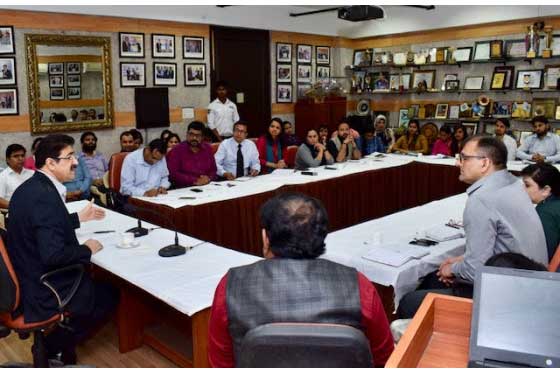