Noida: “It is my pleasure to accept the Chair of Indo Bosnia Cultural Forum but the forum needs guidance by the most appropriate person and that person is H.E. Sabit Subasic Ambassador of Bosnia And Herzegovina. We request him to be the Patron of the forum,” said Sandeep Marwah President Marwah Studios at 6th Global Festival of Journalism.

“I am keen in developing relations between two countries and culture diplomacy is the best way to proceed,” said Sabit Subasic to the large audience at the launching of forum.

Ambassador Sabit Subasic officially became the Bosnian Ambassador to India in 3rd March 2014. Before coming to India he was a diplomat in Turkey for several years, where he witnessed some of the crucial phases of unique democratic development of the nation.

Tue Mar 6 , 2018
Noida: International Chamber of Media And Entertainment Industry created another organization to build and promote relations between two countries India & Bosnia And Herzegovina under the name and banner of Indo Bosnia Cultural Forum. The remarkable opening of 6th Global Festival of Journalism was followed by the launching of Indo Bosnia […] 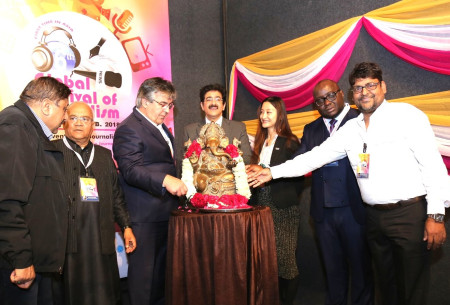