Noida: The sixth edition of the most exclusive journalism festival of the World opened at Noida Film City with great pomp and show. Large number of national and foreign delegates made the journalism festival colorful and vibrant on the first day of the event designed for 12th to 14thFebruary, 2018.

“Seven years back we announced 12th February as the International Day of Journalism, as there was no day marked earlier for the oldest profession on earth. To mark respect to the day we started Global Festival of Journalism every year,” said Sandeep Marwah President of International Journalism Centre and the festival.

“We are thrilled to be the part of the 6th edition of first ever festival of this kind in the World. Bosnia and Herzegovina and India friendship has taken a new shape today. Media can boost our relationship to bigger platforms,” said H.E. Dr.Sabit Subasic Ambassador of Bosnia And Herzegovina while lighting the ceremonial lamp to inaugurate the festival.

“Marwah studios is the Mecca and Medina of film and media activities. Last time I was here for launching of Indo Ghana Film And Cultural Forum. Global Festival of Journalism has brought India and Ghana once again close to each other. I invite Marwah to Ghana as a state guest to further enhance our ties,” said H.E. Michael Aaron N. N. Oquaye Esq (Jnr) High Commissioner of Ghana to India.

The reaches of 12th February as International Day of Journalism and Global Festival of Journalism have induced many organizations in the World to celebrate this day. I am ready to go to any extend to promote good journalism,” added Dr. Ved Pratap Vaidic veteran journalist of India.

The festival organized workshops, seminars, interactions, talks, exhibitions, screening of documentaries, release of posters etc. on the first day along with launching of Indo Bosnia Film And Cultural Forum by the Ambassador of Bosnia. 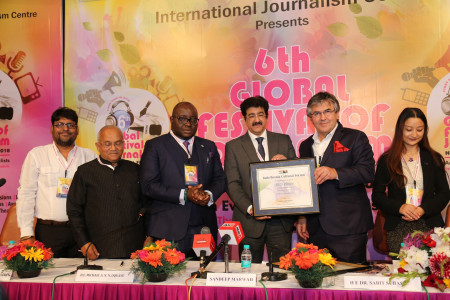