Noida: “I am going to carry back home to Fiji the enthusiasm which Sandeep Marwah has showered today during our meet of Indo Fiji Film And Cultural Forum,” said H.E. Faiyaz Siddiq Koya Minister for Industry, Trade, Tourism, Lands & Mineral Resources Government of Fiji during his official visit to the ICMEI international Headquarters at Noida Film City.

“Sandeep Marwah deserves much appreciation for his untiring contribution towards development and promotion of relations between India and Fiji. May I request Minister to honor him with the memento as a gesture of goodwill from the Government of Fiji,” said H.E. Nilesh Roneel Kumar Charge d’ Affaires High Commission of the Republic of Fiji to India.

“I am impressed by the facilities and quantum of film, television, media, art and culture business Marwah has done in all these years. His six World records are enough to represent his works,” added Minister while handing over the award to Marwah in a grand event at Marwah Studios.

“I am touched by the gesture of the Minister and assure you that this organization will prove its point of view very soon,” thanked Marwah.

Sat Feb 3 , 2018
Noida: A school planned by Marwah Studios for the underprivileged children 10 years ago, has grown bigger in size, quality and quantity. Now there are 15 branches with almost 1000 students studying in primary classes. “It is the occasion to celebrate our success as we have grown from one to […] 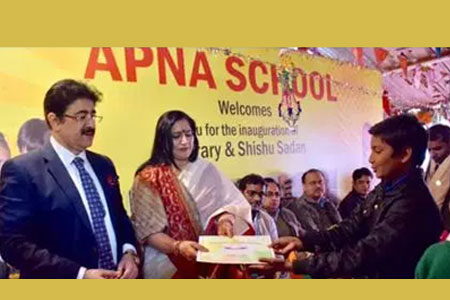