New Delhi: AICTE- All India Council for Technical Education in association with IECSME- Indo European Chamber of Small And Medium Enterprises have jointly launched the program to cover the Prime Minister’s vision of developing the villages of India.

“We have given a name-“Developed Village Developed Nation” to this scheme where 10300 AICET approved colleges will adopt one village and will look after its progress,” said Vijay Tewari President of IECSME in a convention at New Delhi.

“An effort has been made to involve 10300 college to be part and parcel of this scheme. A message has been send across to 3.7 Million Students of these colleges to participate in the progress of villages,” added Anil Dattatraya Sahasrabudhe Chairman of the Council addressing the educationist in the convention.

Sandeep Marwah President of International Chamber of Media And Entertainment Industry has been taken on the board to propagate and create awareness of this prestigious scheme of Developed Village Developed Nation.

Thu Feb 1 , 2018
Noida: Radio Noida and MSTV can be of great help in propagating Khadi and its products all over the World, as both are world broadcasters. We need to promote Khadi to help villagers and small scale units in India,” said Jainandu of Khadi Gramodyog Sansthan addressing the media persons at […] 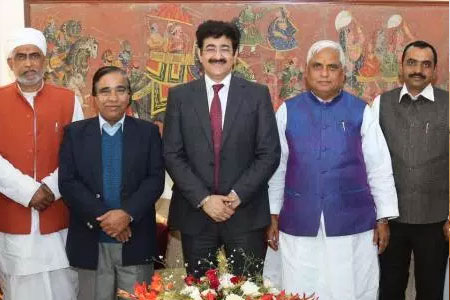