Noida: Indo Fiji Film And Cultural Forum of International Chamber of Media And Entertainment Industry honored H.E. Nilesh Roneel Kumar Charge d’ Affaires of Republic of Fiji to India as the Patron to the forum.

“There are so many similarities in the culture of India and Fiji, don’t forget that the Indian who moved to Fiji many years back have preserved that culture even after third generation. We have very strong ties with India and these kind of association will cemented relations in much better way,” said H.E. Nilesh Roneel Kumar while lighting the ceremonial lamp at Asian Academy of Film And Television.

“Our sole purpose is to bring in love, peace and unity in the World through art and culture. Films, television and media is our forte and will use this strong medium to highlight our association. Last time we have announced a scholarship for the deserving student from Fiji to learn the cinema here in India,” said Sandeep Marwah President of AAFT and Chamber.

“We have no hesitation in allotting a monthly program on radio and television talking about our relations with Fiji. Radio Noida, which is a World Radio, can be heard in Fiji also. It is same with our MSTV on line TV station that can be seen in FIJI also added Marwah.

Thu Feb 1 , 2018
New Delhi: AICTE- All India Council for Technical Education in association with IECSME- Indo European Chamber of Small And Medium Enterprises have jointly launched the program to cover the Prime Minister’s vision of developing the villages of India. “We have given a name-“Developed Village Developed Nation” to this scheme where […] 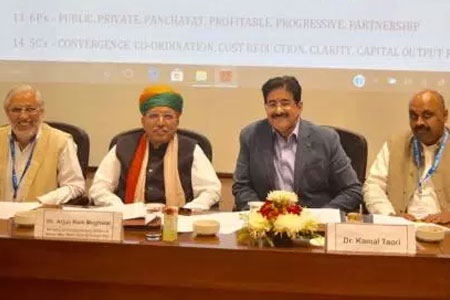