New Delhi: “I extend my heartiest congratulations to all the citizens of Republic of India on this auspicious day of 26th January. My best wishes to each and every one for a bright and a strong future,” said Sandeep Marwah President of Marwah Studios in a function addressing media persons.

“The nation has given us every thing what you can dream in life. Now it is our turn to give back to the nation,” added Marwah also President of Asian Academy of Film And Television.

India’s constitution came into effect on Republic Day, January 26, 1950. This date was chosen as it was the anniversary of Purna Swaraj Day, which was held on January 26, 1930.The constitution gave India’s citizens the power to govern themselves by choosing their own government informed Marwah.

Thu Feb 1 , 2018
Noida: Indo Fiji Film And Cultural Forum of International Chamber of Media And Entertainment Industry honored H.E. Nilesh Roneel Kumar Charge d’ Affaires of Republic of Fiji to India as the Patron to the forum. “There are so many similarities in the culture of India and Fiji, don’t forget that […] 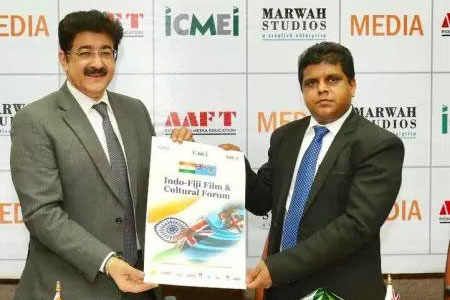