“I am impressed by the interest shown by the students of different colleges of Delhi and NCR in film making. It has given a very strong picture that Indian cinema has great potential in attracting youngsters. The scope is unbelievable, what we need is a set of dedicated people who can do and die for cinema to promote and bring cinema to World level,” said Sandeep Marwah while lighting the inaugural lamp.

Suresh Kumar Director General IIMC, Bharat Kumar of RSS and Arun Kumar Cinema Coordinator of Udaan were also present there. More than 400 students learned about cinema in two days, which was just an orientation towards skill development.

AAFT and Koreans Will Together Promote Arts

Wed Jan 17 , 2018
Noida: The visit of Korean team to Asian Academy of Film And Television revived the Indo Korean Film And Cultural Forum of International Chamber of Media And Entertainment Industry. “We are good friends and Marwah Studios is our permanent platform when it comes to any Korean performance or visit,” said […] 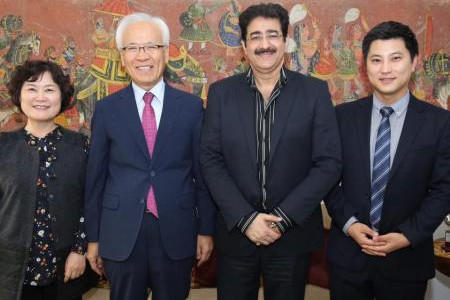