Noida: One of the most unique film festivals of the World-International Festival of Cellphone Cinema will see its 11th edition in the month of February along with 6th Global Festival of Journalism 2018 announced by Sandeep Marwah the President of International Film And Television Club.

“12 years back we thought of starting a short film on mobile, Prof. Karl Bardosh of Tisch School of Arts, New York University, USA joined hands with us to complete the film half in Noida and half in New York. Screening of that first film gave us an idea to start a film festival of films made from mobile phone,” said Sandeep Marwah also President of Marwah Studios.

“International Festival of Cellphone Cinema is first of its kind in the World. The scale and grandeur added by Sandeep makes him a show man of the international film industry,” said Prof. Karl Bardosh Master Professor in Tisch School of Arts.

A colorful poster was launched at Marwah Studios to start propagating the entries from all over the World. AAFT- Asian Academy of Film And Television will be the host of the event said V.S. Kanan Dean AAFT. 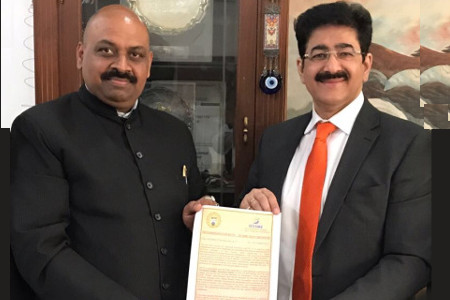