New Delhi: First Time in last 100 years of Hindi Cinema an exclusive award to the tune of National level has been constituted to be presented and honored to people from the Hindi Cinema fraternity every year in the most important and prestigious auditorium of the country at Vigyan Bhawan

“Hindi Cinema has been instrumental in uniting the whole country of Republic of India to one. Hindi Cinema has been the ambassador of Indian culture in more than 150 countries of the World. Not even one single country where Hindi cinema is not watched not only by Indians, but by the Asians, Africans, Australians, South America, North America and Europeans,” said Sandeep Marwah President of ICMEI talking to the nation from the platform of Vigyan Bhawan.

International Chamber of Media And Entertainment Industry has been planning and working on this subject from last one year and today they have been successful in implementing the same. Government of India has been kind and they have full support from all the federations and organizations controlling and supporting Hindi Cinema.

The presence of Vijay Goel Minister for state Parliamentary Affairs And Statistical Implementation boosted the confidence. Shatrughan Sinha Member Parliament and former Minister in Government of India, this time, Chair for award committee and the most well-known film personality of the country was also present there.

“The presence of so many people here is the proof of our sensible decision. I am sure next year the event will be much more powerful,” Marwah thanked each and every one for their presence and cooperation. 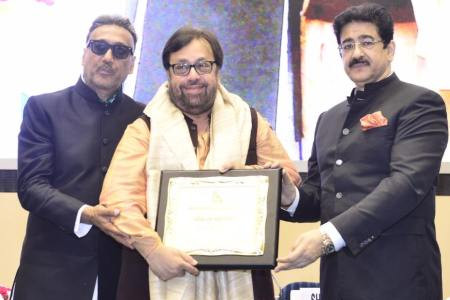