Noida: The High Commissioner of Ghana to India has honored and nominated a popular film and television personality and founder of Noida Film City Sandeep Marwah as the Chairperson of newly constituted Indo Ghana Film And Cultural Forum.

“We are thankful to God, we believe in, for helping us in framing a wonderful and powerful organization as Indo Ghana Film And Cultural Forum. I am pleased to nominate Sandeep Marwah of Republic of India and a Global Peace Ambassador as the Chair for the same,” said H.E. Michael A N N Oquaye High Commissioner of Ghana to India while honoring him with the chairmanship of IGFCF.

“It is not only an honor but a pleasure to serve the people of Ghana and India through arts and culture. We have always believed that we can bring love, peace and unity to this World through art and culture,” said Sandeep Marwah accepting the memento.

The members of film, television, media, art and culture fraternity attended the event. The launching was hosted at Marwah Studios and supported by International Chamber of Media And Entertainment Industry.

Sat Dec 9 , 2017
Noida: To support the Foreign Policy of Honorable Prime Minister of India of building very strong relations with all the countries of the World, ICMEI- International Chamber of Media And Entertainment Industry has created another International committee with Ghana. “We are enthusiastic to launch a new forum and happy to […] 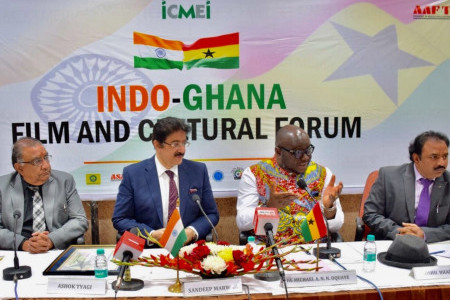