H.E. Archil Dzuliashvilli Ambassador of Georgia to India inaugurated a colorful photographic exhibition under the title Faces: The Portraits Studios in India And Georgia. at Palm Court Area of Habitat Centre.

The exhibition projected the real work of photographs by Suresh Punjabi and Shalva Alkhanaidze when Georgian Photography Week in India was announced. Ms Nestan Nijaradze curated the show who is also the Artistic Director of Tbilisi Photo festival.

“We would love to showcase these photographs at our own centre at Noida Film City to give beautiful comparison between Indian and Georgian photographers,” said Sandeep Marwah.

Mon Dec 4 , 2017
Noida: A delegation of 14 senior officers of Government of Lesotho under the leadership of the Principal Secretary Office of the Prime Minister of Lesotho Ms Mataeli Makhele visited Marwah Studios to understand the media and entertainment industry of India on the recommendation of Ministry of External Affairs, Government of […] 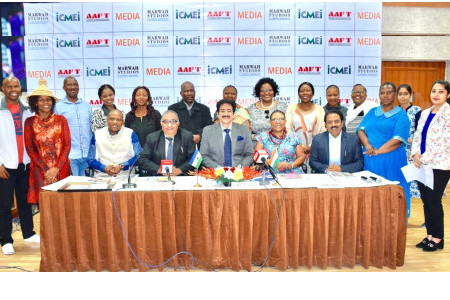