Noida: A powerful and a colorful Global Art and Cultural Summit was organized by AAFT and International Chamber of Media And Entertainment Industry in association with Ministry of Skill Development and Entrepreneurship, Government of India at Marwah Studios Film City Noida.

â€œWe welcome you to India. I belong to film, media, art and culture fraternity where we have never believed in dividing the society on the basis of cast, creed, religion, color, region, language etc. We have only one religion and that is entertainment. Our language is language of emotions,â€ said Sandeep Marwah President of ICMEI- International Chamber of Media And Entertainment Industry addressing the full house of people from all over the World.

Foreign delegates from Niger, Peru, Sri Lanka and Mongolia inaugurated the first session. â€œWhat an idea, we are full of new energy now to do something for the community,â€ said Mamane Oumarou delegate from Niger â€œArt and Culture is the only way to promote relations between two countries,â€ said Sergio Rafael Leon Aranda delegate from Peru.

â€œWe appreciate the unique way of conducting this summit and bringing so many countries under one roof,â€ said RatnasingamNavaseelan delegate from Sri Lanka.â€œWe are open for suggestions and ready to work for the World Unity under the leadership of Sandeep Marwah,â€ added Davaadulam Myagmarsuren delegate from Mongolia.

â€œAll the international projects by ICMEI are not only valuable but they are full of zest and entertainment. There is lot to learn from Sandeep Marwah who is an institution in himself,â€ said Dr. Rishi Raj Singh Director, Ministry of Skill Development and Entrepreneurship, Government of India.

A vibrant poster of the summit was released and later signed by all the delegates from all over the World as a gesture of accepting the final quote declared by Sandeep Marwah that Love Peace And Unity Through Art And Culture is the best way to unite the World.

Delegates from nineteen countries including Nepal, Uganda, Peru, Afghanistan, Niger, Mongolia, Sri Lanka, South Africa, Ghana, Tajikistan, Russia, Uzbekistan, Botswana, Zimbabwe, Ethiopia, Kiribati, Kenya, Azerbaijan and India were attending this well designed summit where every one spoke their heart out. The theme of the summit was Love Peace And Unity through Art And Culture.

Wed Nov 29 , 2017
Noida: The 97th Batch of Asian Academy of Film And Television declared open by the President of the Asian Education Group Dr. Sandeep Marwah at Marwah Studios, Film City Noida. â€œI am feeling like a proud father who has to sit with his children to give information and guidance about […] 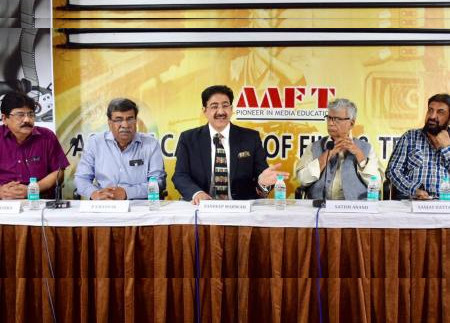