New Delhi: AAFT has joined hands with Paridhi Art Group and All India Folk And Tribal Art Parishath to promote folk and tribal arts through art festival in Delhi NCR where a festival has been planned for March 2018.

â€œWe are keen in promoting all kinds of arts and culture. We have always believed that art and culture can bring love, peace and unity in the World. The art has no religion and no caste,â€ said Sandeep Marwah President of Asian Academy of Film And Television in a meeting at Noida Film City.

â€œSandeep Marwah is already our patron at Paridhi Art Group, his presence and experience is going to enhance the festival. Folk and tribal arts need lots of promotion in the country,â€ said Nirmal Vaid Chairman and Chief Functionary of Paridhi Art Group.

â€œWe are quite active in South India, now we have joined hands with AAFT, we will be able to promote tribal and folk arts much faster and systematically,â€ added Raghu Hassan General Secretary of All India Folk And Tribal Art Parishath. The event will be supported by International Chamber of Media And Entertainment Industry.

Wed Nov 29 , 2017
Noida: A powerful discussion took place in the seminar when renowned filmmakers expressed their views on new kind of cinema now available to the audience. â€œThe definition of feature has changed from long hours to 90 minutes. This will treat as feature film and film can enter into any international […] 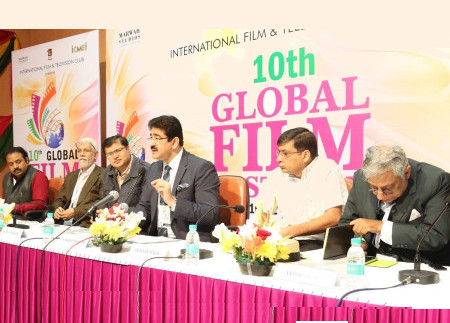