The idea of this kind of book strings together â€˜Indianâ€™ achievements originated in 1989, The objective was simple- to provide a platform to ordinary Indians to showcase their talent in their search for excellence. It was difficult then to ferret out details from people for an entity that did not exist.. The Vajra world records using and thrilling but also inspiring and informative.

â€œI am excited that my World Record has been entered into the books of Vajra World Record. I feel so satisfied,â€ said Sandeep Marwah President of Marwah Studios on receiving appreciation and approval from Vishakapatnam.

Sat Nov 25 , 2017
New Delhi: Sandeep Marwah President ICMEI- International Chamber of Media And Entertainment Industry extended his best wishes to H.E. Gonchig Ganbold the Ambassador of Mangolia to India on the 93rd Anniversary of Republic Day and 62nd Anniversary of Mongolia and India Diplomatic relationship at a grand function at Taj Mansingh […] 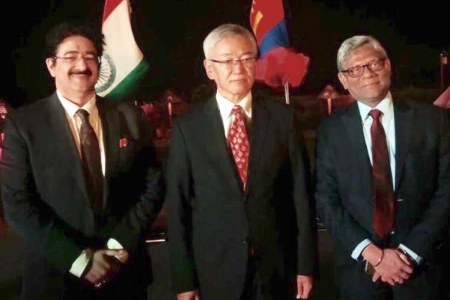