Noida: The 10thÂ Edition of the biggest film festival of North India â€“Global Film Festival Noida was inaugurated at Noida Film City. Large number of delegates from India and abroad were the participants.

â€œWe have grown in last ten years, the reach of Global Film Festival Noida has gone to 145 countries of the World. A large cinema library has already been established. We are now part of many countries as far as cinema relations and development is concerned,â€ introduced Sandeep Marwah President of Marwah Studios and GFFN.

â€œIndia and Romania are good friends, through cinema and arts we bring our friend ship to new level. Romania has been a part of Indian films already many times we hope these festivals will bring more awareness of each others facilities,â€ said H.E. Radu Octavian Dobre Ambassador of Romania to India while inaugurating the festivals.

â€œThe excitement and the positive vibrations of the festival are serving the purpose of the event that is love peace and unity through art and culture,â€ said Donald H Green renowned artist from Australia.

â€œFilm festivals are the best way for a filmmaker to express himself and built up solid contacts. Youth must be given a right guidance to move further in visual media,â€ added Gauri Munjal renowned actress from South.

Festival remained in the campus of Marwah Studios at Noida Film City for two days and the third day of the festival saw the Hindi Cinema Samman Samaroh at Vigyan Bhawan. This is the new national award constituted for Hindi Cinema.

Fri Nov 17 , 2017
Noida: A renowned artist from Australia Donald H Green was the attraction at 10thÂ Global Film Festival Noida who displayed his works at the festival for the film delegates from all over the World. â€œPaintings provide us a wonderful base to have color and composition sense and develops our esthetics sense. […] 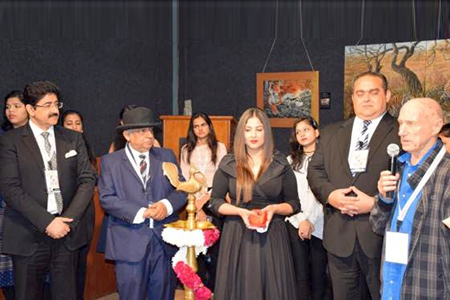