Noida: AAFT School of Cinema had seen another interesting program when a filmmaker from Spain expressed his way of film making and shared a wonderful experience in the shape of a workshop at Marwah Studios.

â€œA well-known film maker David Canovas from Spain is now part of our foreign faculty. His deep interest in film teaching has benefited the students of school of cinema today,â€ said Sandeep Marwah handing over the life membership of International Film And Television Club of AAFT to the Spanish filmmaker.

An interesting questions and answer session with students brought many new points on the table. Henna Anzi, a filmmaker from Israel, conducted the workshop. Later Marwah also discussed other opportunities available to promote Indo Spanish Film And Cultural Forum of International Chamber of Media And Entertainment Industry.

Tue Nov 7 , 2017
New Delhi: All the regional cinemas in the Republic of India are taken care by the states them selves. There is a provision to promote to the regional language through Cinema. Hindi, which is supposed to be the National Language has been ignored as no state come forward to promote […] 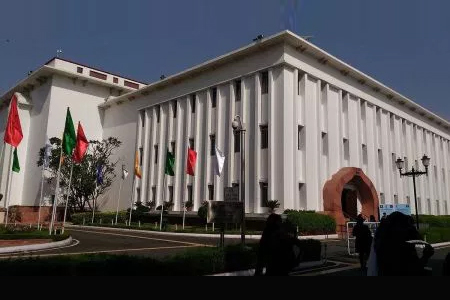