New Delhi: â€œA man who has brought films to Delhi in full swing and kept the legacy of Indian Film Industry in North India, The contribution of Sandeep Marwah has no comparison what so ever. Film City, Film business, film tourism and film events at Marwah Studios has added a lot to Indian film industry,â€ a citation read by KIran Kaur Kamra the president of the organization.

Sandeep Marwah was honored for his contribution to Indian Cinema on the birth anniversary of legend film star Deva Anand in grand function at India Islamic Cultural Centre, New Delhi in the presence of music veterans of Delhi including Amarjeet Singh Kohli and VSK Sood.

â€œWhat a pleasure to receive this prestigious award on the birth anniversary of Dev Anand. Music is life and now cannot be separated from our day-to-day life. Entertainment is a parallel line of our routine business. I am here to add on to better and comfortable life,â€ said Sandeep Marwah thanking every one. Later Sandeep Marwah presented awards to different artist and art promoters of Delhi.

Mon Oct 9 , 2017
New Delhi; The Media And Entertainment Industry in India is emerging as one of the biggest industry as it will touch a turnover of 180,000 crores at the end of next year. Government and private players have ample to look after many important issues of this industry,â€ said Sandeep Marwah […] 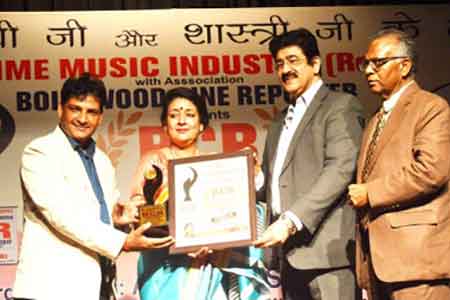