Vienna:Â TourismÂ forms an important part ofÂ Austriaâ€™s economy, accounting for almost 9% of the Austrian gross domestic product. Austria has one guest bed for every six inhabitants, and boasts the highest per capita income from tourism in the organization of economic and tourism development informed department of tourism to Sandeep Marwah President Asian Institute of Hospitality and Tourism during his stay at Vienna in Austria.

â€œThe visit to Vienna has proved worthwhile as I have learned the size of tourism and facilities a tourist can expect from an international market,â€ added Sandeep Marwah also Managing Director of National Federation of Tourism And Transport Cooperatives of India Limited talking to people from tourism industry at Hotel Hilton Plaza, Vienna.

Mon Sep 18 , 2017
Salzburg: â€œI am very happy to note that Mozart University is inviting International Music Schools to its festival for better learning and understanding music,â€ said Sandeep Marwah President of Asian School of Performing Arts on his visit to Salzburg, Austria. Music is always in the air in Salzburg, the city […] 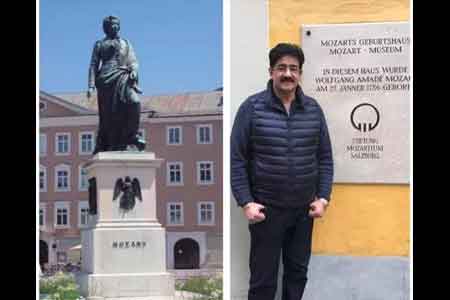