â€œWe are here to pay our respect to our great Indian Poet, writer and noble Laureate Rabindranath Tagore. It is not only a visit but a gratitude to the Indian who has contributed a lot to the arts and culture of India,â€ said Sandeep Marwah also recently nominated Global Cultural Minister.

I am thankful to Hungarian Government who have thought of such a wise step of placing Tagoreâ€™s Statue at such an important place added Marwah. Sandeep Marwah was accompanied with wife Reena Marwah and friends Rohit Mehra, Rajiv Mehra, Deepa Mehra, Rachna Mehra, Edit Osko and Boldizsar Peter Entz from India and Hungary.

Sandeep Marwah Addressed at House of Commons at British Parliament

Wed Sep 13 , 2017
London: The renowned International media person Sandeep Marwah from Republic of India was honored as â€˜Ambassador of Peaceâ€™ at the House of Commons in British Parliament for his untiring efforts to bring in love, peace and unity in the World through arts and culture. Marwah is chairing more than 100 […] 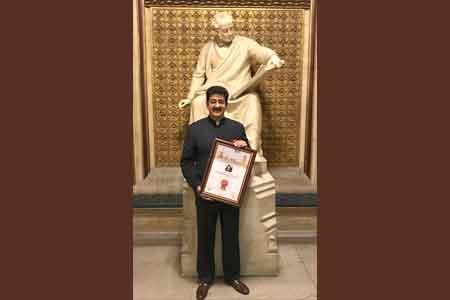