Noida: The team of Feature film Munna Michael along with Tiger Shroff and Nidhhi Agerwal visited Marwah Studios to promote their film. Asian Academy of Film And Television organized the event.

â€œWe are here to tell to tell you that we are coming with our next feature film Munna Michael. It is a wonderful occasion when you all are entering into the World of Glamour by being a part of AAFT. I wish I could join AAFT earlier,â€ said Tiger Shroff known for his films like Heropanti, Baaghi and A Flying Jatt.

Tiger was accompanied by the leading lady of the film Nidhhi Agerwal a Kathak Dancer and finalist of Diva 2014.â€I am amazed to see the energy here. I am sure you all will fulfill your desires here,â€ added Nidhhi Agerwal.

Wed Aug 2 , 2017
New Delhi: A delegation comprising of members from ICMEI- International Chamber of Media And Entertainment Industry and GCTC- Global Counter Terrorism Council visited the former Information and broadcasting Minister, Government of India. The members extended their heartiest congratulation to Honorable Venkaiah Naidu on being nominated as the candidate for the […] 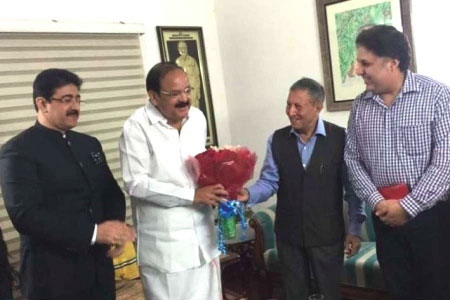