New Delhi: Indo Venezuela Film And Cultural Forum extends its heartiest congratulations to the country of Bolivarian Republic of Venezuela and to H.E. Augusto Montiel Ambassador of Venezuela to India on its national day. Through films, art and culture we will be able to make strong bridges between the two countries,â€ said Sandeep Marwah President of Marwah Studios and ICMEI at the grand function at Embassy of Venezuela as a special guest.

â€œVenezuela is the country of love and affection. Our relation with India is more than just selling the Oil. Our relationship has grown many folds in last few years. We will take our relations to further height through large number of business together,â€ said H.E. Augusto Montiel Ambassador of Venezuela to India in a opening address.

The national anthem of both the countries were played with great respect and honor where Mansukh L. Mandavia Honorable Minister of State for Transport and Chemicals was the chief guest of the Event.

The national Day of Bolivarian Republic of Venezuela falls on 4th July where large number of Ambassadors, High Commissioners, and people from all strata of life attended the event.

Sandeep Marwah Honored for his Contribution to Film Tourism

Mon Jul 31 , 2017
New Delhi: â€œI have always believed that there is a very thin line between cinema and tourism. Both are glamorous trade and needs personal attention,â€ said Sandeep Marwah President of Marwah Studios at a international expo on tourism at Hotel Pride Plaza. Film tourism has become one of the most […] 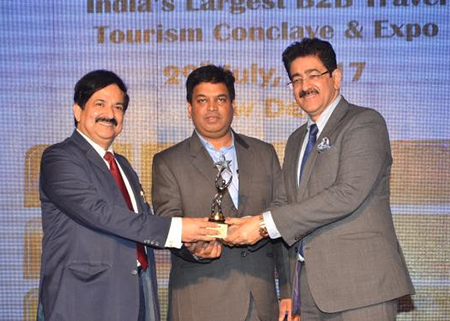