â€œThe art of writing is the expression of your thoughts and feelings. The poetry book of Punesh Anand has added a lot to the literature when people are forgetting to write. I hope he continues to write and would love to be the part of his second book launching function too,â€ said Justice G.S. Sasthani while releasing the book Nichod.

â€œI have been appreciating Punesh Anand for his art of writing, he has reached to the stage where he has started talking in poetry. I have understood that he must be given an opportunity to come in public with his talent,â€ said Sandeep Marwah President of Marwah Studios.

â€œI am amazed and surprised by the organizing capacity of Marwah Studios who all have not only identified me out of crowd but also published my work in no time. From No where to Some Where-this is life. I am thankful to each and every one who has helped me in reaching to this platform and declaring me a Poet,â€ added Punesh Anand emotionally.

Sushil Bharti analyzed the poetry in detail and also read few of them in public. Mrs Maniderpreet Sasthani and Harsh Anand also spoke on the occasion.

The event was attended by large number of important people from different starta of life and supported by family and friends. Asian Academy of Arts and International Chamber of Media And Entertainment designed the launching function.

Mon Jul 17 , 2017
New Delhi: Indo Venezuela Film And Cultural Forum extends its heartiest congratulations to the country of Bolivarian Republic of Venezuela and to H.E. Augusto Montiel Ambassador of Venezuela to India on its national day. Through films, art and culture we will be able to make strong bridges between the two […] 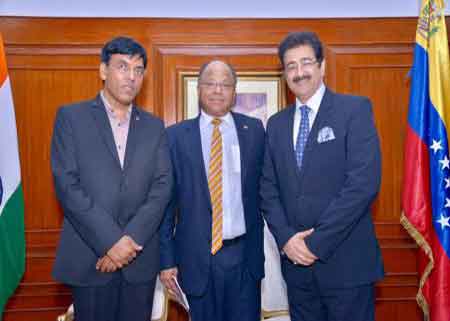