Noida: Renowned art lover and art presenter Dr. Mridula Tandon has been nominated as the Co Director of one of the biggest literary festival of India Global Literary Festival Noida 2017 edition.

The management and administration under the president ship of renowned international media personality Sandeep Marwah has decided to bring Dr. Mridula Tandon on the board of GLFN 2017. GLFN is supported by Asian Academy of Arts and Asian Academy of Film And Television.

â€œI am pleased and honored to be now part of GLFN 2017. I have always prayed art as a religion. I will leave no stone unturned to add on to the existing literature festival,â€ said Dr. Mridula Tandon also the president of Sakshi Charitable Institution.

The Secretary General of International Chamber of Media And Entertainment Industry Ashok Tyagi and Director of Festival of Global Literary Festival Noida Sushil Bharti handed over the letter of appointment to Mridula Tandon at Marwah Studios, Film City Noida.

Dr. Mridulaâ€™s contribution towards promotion of art and culture is immense. She is an asset to the organization,â€ said Sandeep Marwah President Marwah Studios.

Wed Jul 12 , 2017
New Delhi: â€œA wonderful presentation is the first part of any glamour business. When it comes to beauty you are bound to look good and beautiful. Thousands of companies have spend millions of rupees in the research of manufacturing extra ordinary products especially Women to look good, these expo are […] 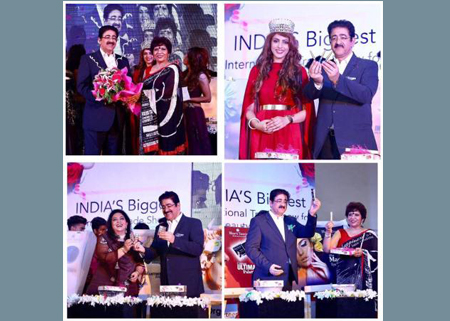