â€œI am impressed by the size and grandeur of the event and especially the great participation of the people in this game. This competition has raised the level of boxing in India. The credit goes to the organizers of the game,â€ said Sandeep Marwah also Patron to India Professional Boxing Association and Amjad Khan Boxing Foundation.

British business tycoon Bill Dosanjh and British pro boxer & Olympic Champion Amir Khan founded the Super Fighting League in 2012. Its intent is giving Indian mixed martial artists a platform to compete and grow in its home country whilst bringing in talented fighters from different parts of the world. They launched their first event on March 11, 2012, which was headlined by Bob â€˜The Beastâ€™ Sapp and James â€˜The Colossusâ€™ Thompson. Amjad Khan of Amjad Khan Boxing Foundation supporting the event.

Wed Jul 12 , 2017
Noida: Renowned art lover and art presenter Dr. Mridula Tandon has been nominated as the Co Director of one of the biggest literary festival of India Global Literary Festival Noida 2017 edition. The management and administration under the president ship of renowned international media personality Sandeep Marwah has decided to […] 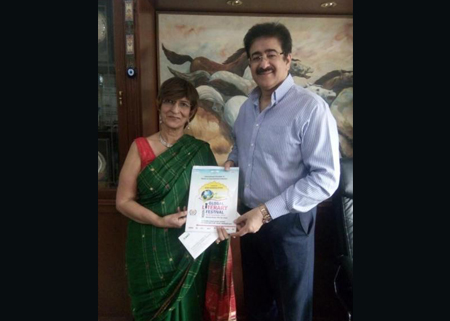