New Delhi; â€œThe Indian Professional Boxing Association is growing day by day. The interest with the public has been generated in a much bigger way than our own expectations. Interstate and international games have been planned to promote professional boxers in India,â€ said Sandeep Marwah Advisor to IPBA.

The superstar of the international boxing scene Holyfield has given his consent to be part of the board at India and shall be visiting soon to promote boxing in India confirmed Shahe Ali President of IPBA.

â€œWe are keeping our fingers crossed and preparing grounds to receive Holyfield,â€ added Amjad Khan Vice President of the organization. The only federation for the professional boxing players- IPBA is now setting its presence and motivating people to come forward to support the association.

Evander Holyfield (born October 19, 1962) is an American former professional boxer who competed from 1984 to 2011. He reigned as the undisputed champion in both the cruiser weight and heavyweight divisions, being the first and to date only boxer in history to do so, which earned him the nickname of â€œThe Real Dealâ€. Holyfield is the only four-time world heavyweight champion, having held the WBA, WBC, IBF, and lineal titles.

Sat Jun 24 , 2017
New Delhi: A well known International media personality and five times World record holder Sandeep Marwah has been nominated as the Vice Chairman of Peacful Mind Foundation as announced by the founder Dr. Nabhit Kapur. Dr Nabhit Kapur said that PMF is the only Organization in India to work on […] 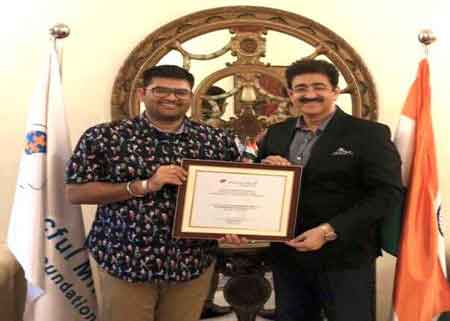