Noida: AAFT- Asian Academy of Film And Television has been the first private film school of the country, it has just celebrated its completion of 24 years of existence. 95th Short term batch has recently begin has proved to the world its quality and untiring support to the Indian film industry said Dean AAFT addressing to the large audience at 94th AAFT Festival of Short Digital Films

Students from 120 countries of the World, exposure to the real industry while learning at AAFT is the biggest specialization of our education system also makes us the most important and exclusive film school of the World added Associate Dean of AAFT.

AAFT has brought three revolutions to the cinema training-one that film education and training has shifted to private hands from government in 1993 when institute was launched. Second we have shifted the Post Graduation courses to graduation level in 1993 and third a very special short-term courses in cinema were launched in 1993 said Sandeep Marwah President of AAFT.

AAFT has been rated as the best film school in this part of the World expressed Mike Berry a filmmaker and jury member from Los Angles attending the event.

Wed Jun 21 , 2017
Noida: 94th AAFT Festival of Short Digital Films is inaugurated with much international participation at Marwah Studios highlighting 15 short films made during the last semester of Asian Academy of Film And Television. â€œIt is a historical day and we are creating a World Record of conducting 94th AAFT Festival […] 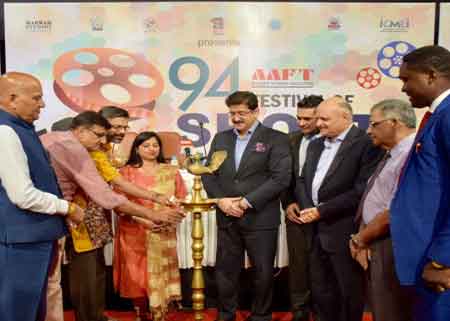