Noida: AAFT is the only film and television school in the World where 95th session has been opened with the students from all over the country of India and abroad.

â€œWe are 95th batch old, it has added ample experience to all the faculty members to part with best of the knowledge possible as far as film, television and media industry is concerned,â€ said Sandeep Marwah President of AAFT-Asian Academy of Film And Television.

â€œAAFT will provide you enough education and training to be successful in this business subject to your punctuality, regularity, sincerity and dedication-the four pillar to success,â€ added Marwah talking about norms of the industry.

Students introduced themselves in the classroom at AAFT and were fascinated by the infrastructure and facilities being provided to them.

Sat Apr 29 , 2017
New Delhi: Sandeep Marwah President of Marwah Studios briefed the President of Republic of Cyprus H.E. Nicos Anastasiades with the length and breath of film business of India and formation of Indo Cyprus Film And Cultural Forum. Marwah handed over the scholarship for the deserving student from Republic of Cyprus, […] 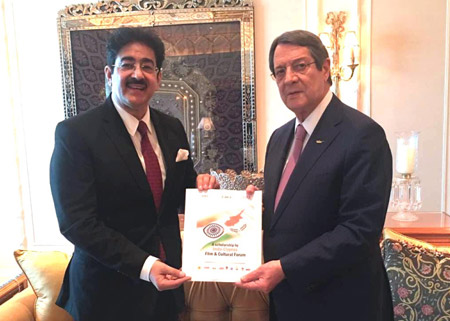