New Delhi: The President of Republic of Cyprus gave a special audience to the renowned film personality of India Sandeep Marwah during his visit to India at New Delhi.

Sandeep Marwah President of Marwah Studios and also the president of International Chamber of Media And Entertainment Industry has been recently nominated as the Chairperson of Indo Cyprus Film And Cultural Forum, was blessed by the President of Republic of Cyprus.

In a short meeting Marwah was advised by H.E. Nicos Anastasiades the president of Cyprus to bring two countries close to each other through art and culture, films, television and media activities.

â€œI am honored to be with you, these precious moments have added a new energy in me. I will leave no stone unturned to develop and promote the relations between the two countries,â€ said Sandeep Marwah presenting a patron ship of Indo Cyprus Film And Cultural Forum to H.E. Nicos Anastasiades President of Cyprus.

â€œI invite you to Cyprus to see for your self this beautiful country which is so picturesque,â€ said H.E. Nicos Anastasiades President of Cyprus while accepting the Patron ship of ICFCF. H.E. Demitrios A. Theophylactou the High Commissioner of Republic of Cyprus to India initiated the meeting.

Wed May 3 , 2017
New Delhi: Renowned film, television and media person Sandeep Marwah has been nominated as the Chairperson for newly constituted Cultural Committee at PHD Chamber of Commerce. â€œ We are proud to have a member like Sandeep Marwah as the chairperson of Culture Committee. We are sure through this committee we […] 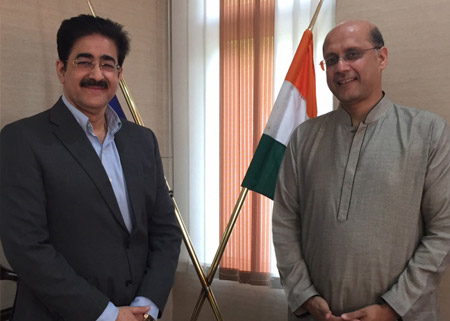