Noida: â€œAfter the Grand Success of Global Film Festival, Global Festival of Journalism and Global Literary Festival we are encouraged to present First Global Fashion And Design Week Noida to the nation,â€ introduced Sandeep Marwah President of GFDWN at a grand opening of the week.

The Global Fashion And Design Week has been planned in association with AAFT School of Fashion and Design and International Chamber of Media And Entertainment Industry and many national and international organizations to bridge the gap between education and industry, to promote Indians and foreign designer and their works and to support the whole design industry.

â€œIndia and China has grown a lot in its relations, it has today added a new wave to our diplomatic relations and friendship. Today launching of Indo China Culture Forum from this platform will bring two countries together in a much stronger way,â€ said Zhang Zhihong Cultural Counselor Embassy of the Peopleâ€™s Republic of China while inaugurating the fashion and design week.

â€œNo one has thought of this kind of design week, I must congratulate the team of Marwah Studios for bringing another property of an international level for the world of design,â€ said Nirmal Kulkarni senior Architect.

â€œMost of the fashion weeks finishes with fashion show, this is the complete fashion and design week where we will be able to relate ourselves with the industry, education, information and entertainment,â€ said Rashmi Sachdeva Mrs Universe Euroasia.

â€œThe untiring efforts of Sandeep Marwah have brought the state of Uttar Pradesh in general and city of Noida in particular to the World map of cinema, glamour and entertainment. He is one of the most prominent personality of the State of UP,â€ said Sandeep Singh a well-known educationist and social worker from Noida.

â€œThe aura of Marwah Studios is so big that any one who gets in contact with this institution gets a wonderful opportunity to go global. Marwah Studios has gone much above the expectations of a common man,â€ said Amit Ranjan super Model.

Wed Apr 26 , 2017
Noida: International Chamber of Media And Entertainment Industry has grown with another international event when First Global Fashion And Design Week Noida inaugurated at AAFT, Noida Film City. A new committee under the name and title of Indo China Cultural Forum was announced by Zhang Zhihong Cultural Counselor of Embassy […] 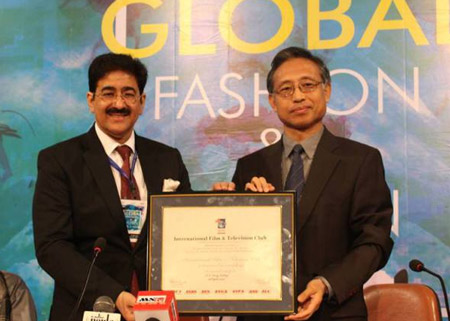