Noida; The alumnus of AAFT- Asian Academy of Film And Television Mohibullah Hamidi has been honored by the President of AAFT Sandeep Marwah for his extra ordinary contribution towards the film and television industry.

Mohibullah Hamidi has recently visited AAFT to pay his gratitude to the Alma Matter and informed about his huge list of credits and achievements. He is one of the very few Afghanistan nationals who have recently produced and directed feature films and documentaries even during tough internal conditions.

â€œThe academy is proud of Hamidi and pleased to honor him with the life membership of International Film And Television Club of AAFT. He has also been honored with the leadership award for emerging as one of the prominent film makers of Afghanistan,â€ said Sandeep Marwah while awarding him at Marwah Studios.

â€œI owe my success completely to AAFT for educating me and training me in films, & television and teaching me the norms of film making. I have never found a teacher better than Sandeep Marwah,â€ expressed Hamidi.

Mon Apr 3 , 2017
The President of ICMEI- International Chamber of Media And Entertainment Industry, Sandeep Marwah has extended his greetings and felicitations to the Government and people of the Republic of Tunisia on the eve of their National Day (March 20, 2017). In a message to His Excellency Mr Nejmeddine Lakhal the Ambassador […] 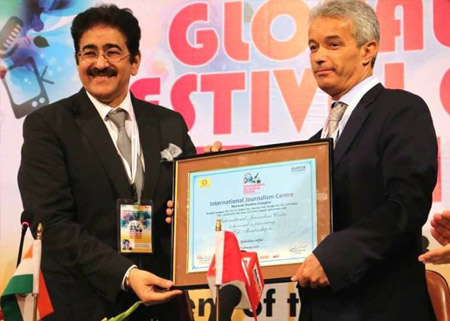