Noida: A well-known Brazilian Singer Carlyta Mouhini popular for her hindi feature film numbers visited Marwah Studios and had a wonderful interaction with the students of Asian School of Media Studies.

Carlyta Mouhini is an Indo Latin artist, vocalist and an electrifying performer. Her genre of music is Latin fusion, Bollywood fusion, Blues Rock and folk Dancehall. She has created waves in the industry by singing songs like Le le Mazaa in Wanted, Excuse me Kya Re in Style and her songs in Golmaal.

Known to be feisty and spirited by nature, she has been a Grassroot Grammy award nominee and is the winner of the NBC award for Best singer International 2010 for her rendition on her song le le lele maaza le-WANTED.

Other than being a singer, she is an accomplished flamenco dancer as well and has performed internationally in Amsterdam, Germany, Spain, Middle Eastern countries etc. She also takes immense pleasure in being the Brand Ambassador for the HOPE foundation â€“ India.

India And Mauritius Can Develop Relations Through Cinema- Sandeep Marwah 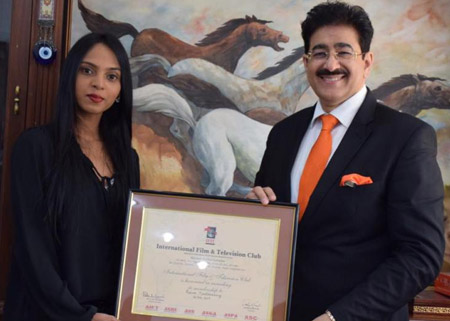