New Delhi: â€œI am handing over this picture of Sandeep Marwah to him which is bigger than the live size as he is a media figure larger than the life size and idol for millions of people who are looking forward to be in media,â€ said Anil Nagpaal senior photo Journalist from New Delhi.

â€œI have been in media for many years but it is not only difficult but impossible to find a man of that caliber and nature. He has helped and motivated thousands of young people to come forward in life,â€ added Nagpaal presenting a huge photograph to Marwah.

â€œI opted this opportunity to be with Anil so that I can also extend my gratitude to Sandeep Marwah. He is now the Patron to one of the biggest and most popular journalistic organization Newspaper Association of India with almost 7500 members from print, radio, television, cinema and new media,â€ said Vipin Gaur Secretary General of NAI.

â€œI am so thankful to my friends for such a beautiful gesture,â€ said Sandeep Marwah President Marwah Studios and International Journalism Centre.

Tue Mar 28 , 2017
Noida: Today we are feeling elevated as we are now marching towards the 100th edition celebration of our festival, only of its kind in the World, very soon. Sandeep Marwah introduced the AAFT Festival of Short Digital Films to the distinguished guests and audience. â€œWhat a grand show and a […] 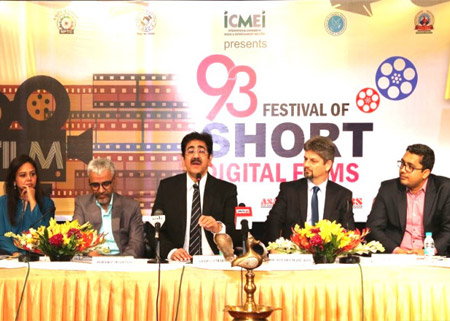