New Delhi: â€œIndia has been always taken as the spiritual leader of the World. An international Yoga Day has been declared by United Nations on 21st June two years back on the request of Indian Government. Now whole World is celebrating and has adapted as a part of life,â€ said Sandeep Marwah President of Marwah Studios at a grand Yoga film festival by Namo Gange.

Sandeep Marwah honored by Acharya Jagdish Ji Maharaj for the promotion of yoga internationally. Marwah has trained more than 10,000 persons in Yoga from more than 100 countries of the World during training hours at Asian Academy of Film And Television.

â€œSandeep Marwah has been nominated as the patron to Namo Gange. His contribution is immense in developing yoga organizations in India and abroad,â€ added Nirmal Vaid member of the board.

Thu Mar 23 , 2017
New Delhi: â€œWe are open to join hands with all those who are keen in developing business with us in India as well as in USA. The purpose of this meet is to inform more about the state of Pennsylvania and its all expansion plans,â€ said Joseph D Burke Deputy […] 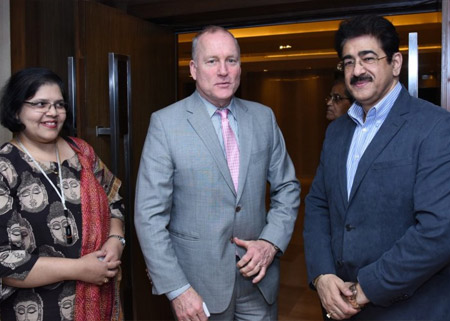