Noida: The new edition of a book of accolades of Sandeep Marwah, a well known international personality, was released at the Global Management Summit 2017 at Noida Film City by the foreign delegates representing high profiled departments of Government of their country.

â€œIt is an opportunity for all of us to be part of a function where a book on accolades of Sandeep Marwah has been releasedâ€ said Maricis D Cura delegate from Philippines.

â€œIt is my first opportunity to meet anyone from Indian film Industry, and that is also a man of such a big statute,â€ added Amadou Sissko delegate from Mali releasing the book.

â€œI am happy to see Indo Malawi Film And Cultural Forum as a part of Marwah Studios. Now I am part of the same,â€ said Alfred Kumbukani Chibwana delegate from Malawi. Meeting a five times World Record Holder is a total bonus in this trip to India. I am thankful to Government of India for sponsoring our visit to India an especially to Marwah Studios,â€ said Tran My Linh delegate from Vietnam.

R.R.Singh Director Ministry of Skill Development And Entrepreneurship, Government of India advised to distribute the book among all the delegates. Sandeep Marwah President expressed his thanks to everyone present there. 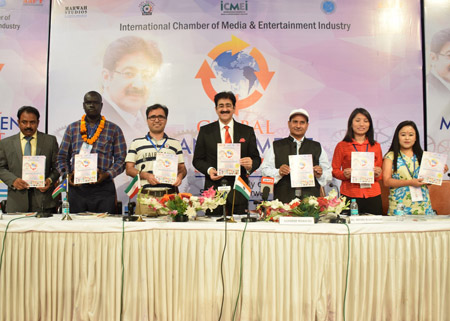