New Delhi; The known film producers and directors Abbas Mustan opted Marwah Studios and Asian Academy of Film And Television as a platform for the promotion of their forth coming feature film Machine at Noida Film City.

The lady in lead role Kiara Advani who is known for her role in Fugly with Mohit Marwah and M.S.Dhoni : The Untold Story with Sushant Singh graced the occasion with her presence and brought new energy into the campus. â€œI was here at the time of Fugly my debut film, I am feeling at home with all of you,â€ said Kiara Advani and won the hearts of the audience.

The new comer Mustafa Burmawala shared his experience from audition to the promotion & release of the film., â€film making and business is a journey in itself. Every day it gets you a new experience and adds to your caliber, I am lucky to be part of this beautiful project,â€ said Mustafa answering many questions by the young film makers.

Abbas Mustan are famous for their hits like Race, Race 2, Hamraz, Ajnabee, Chori Chori Chupke Chupke, Badshah, Soldier, Daraar, Bazighar, Khiladi and many more. â€œWe are happy that we opted AAFT and Marwah Studios, such a strong platform of 15000 media professionals for our film here at Noida Film City,â€ said Abbas. â€œOur film is a love story and you are the right audience for that,â€ said Mustan in a jam-packed auditorium with young media persons.

Wed Mar 15 , 2017
Noida: A well known International media personality and President of Marwah Studios Sandeep Marwah has recently been nominated as the first Chairperson of newly constituted Indo Maldives Film And Cultural Forum by the Ambassador of Maldives to India, Government of Maldives. â€œMy presence is a clear indication of our healthy […] 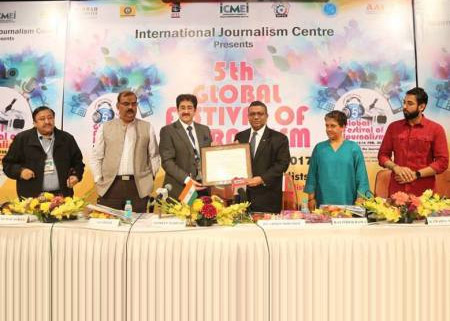